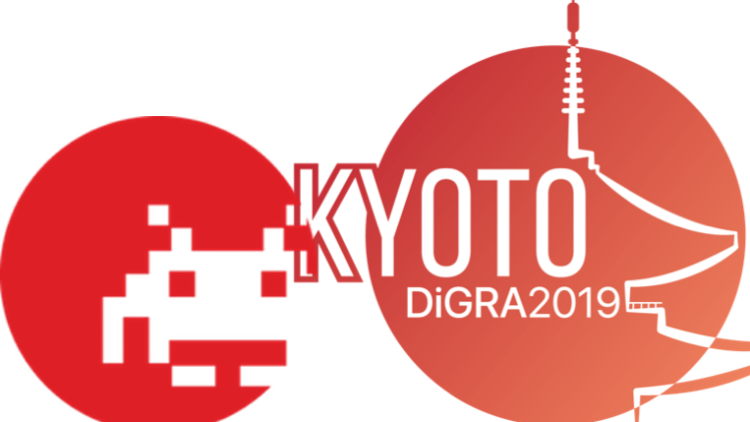 I will give two presentations regarding larp, one at DiGRA 2019 and one at Replaying Japan 2019, both held at Ritsumeikan University in Kyoto.

How can we achieve affective closeness and connectedness with marginalized people who are absent? This question guides an ongoing investigation into larp, live-action role-play, for the purpose of transcultural learning in the Japanese educational context. Larp is a mixture of improv-theatre-like player interaction and game-like challenges aiming for the creation of meaningful, shared stories. Larp organizers specify a setting, players take on characters (as in a theatrical play) and improvise a narrative about a conflict in this setting, for example. Much larp is played for entertainment purposes but artistic, educational and political larps increasingly gain attention worldwide (Pettersson2014, Stenros 2014). Guided by the organizers of such serious games, the participants will afterwards reflect on the collaboratively created story and the emotions it affected, what they learned about the setting and about themselves by making decisions from their characters’ point of view. As designed, real-world situations that evoke strong cognitive and emotional interaction between players and characters, the project to be presented seeks to explore the possibilities of larp as a tool for understanding of and empathy with an absent “other.” This “other” is absent because respective persons have lived in past eras, are located too far away, or it may be an ethical issue to present them in a fashion resembling a zoo exhibit. Instead, participants learn about these persons by interacting with fictional representations or by taking on their perspective and actually becoming other in the designed situation.

In this context, transcultural learning designates an understanding of cultural processes of differentiation, the ways in which persons are made into an “other” different from “us” (Juneja & Kravagna 2013). A prime example of these processes is stereotyping, which increasingly turns into hate speech on the Internet and encourages violence against marginalized groups, such as migrants, sexual minorities, and people with disabilities (cf. Sagamihara stabbings in 2016). Direct encounters can function as safeguards against stereotypes (Pickering 2001). However, such encounters are often hard to facilitate as stated above. Instead, mediated encounters through larp may be a way to foster (trans-) cultural and media literacies to help people understand difference as non-threatening through direct, experiential knowledge.

Larp is only a nascent practice in Japan that has barely been explored for its possibilities in school or civic education. A core goal of this ongoing project is to determine whether larp can be used for sustainable learning effects. How do we need to adjust this toolset for the Japanese educational context? For this purpose, the project seeks to design and test a larp about the perceptions and life-worlds of people diagnosed with Autism Spectrum Disorder (ASD) as an example for a stereotyped and socially excluded group within Japanese society but also elsewhere. Current research questions stereotypes against ASD, for example, their lack of a theory of mind (Komeda et al. 2015).

The larp will face a number of (design) challenges, for which we consider design principles suggested for games seeking to induce empathy (cf. Belman & Flanagan 2010). Transparency about the larp’s goals during the pre-workshop will be combined with tasks throughout the game encouraging empathic play. To not create caricatures and thus possibly reinforce existing stereotypes, we will seek to show diversity of the ASD spectrum as much as possible based on input from qualitative interviews with people diagnosed with ASD as well as continuing feedback throughout the design process. Furthermore, to advance the primary goal of inducing cognitive and emotional empathy, players will not encounter fictitious “others” during the larp but take on the role of these others to experience glimpses of their lifeworlds. For example, participants will have to deal with changing societal rules and overloads of sensory input, two major sources/instances of distress reported by people with ASD. Paramount for any such kind of intervention, such as the projected larp, is space for debriefing (Kriz 2010), where players can make sense of their experiences and discuss them with the facilitators. As is common for larps like this one, briefing and debriefing will most likely take more time than the actual play to frame the experiences of players appropriately.

The presentation will examine these challenges and detail the current status of the larp as well as expected results.

Live-action role-play (larp), where participants interact physically as characters in an improv-theatre-like manner to create a shared story, gained broader interest in Japan only recently but with an exponential growth of players in entertainment and education. In the former area and following trends of related forms of non-digital role-playing games, such as TRPGs or pen & paper RPGs, the horror genre functions as a motor of this increasing popularity.

This paper seeks to trace the development of larp in the Japanese context in light of the online video platform niconicopopularizing horror role-playing and practical considerations of adopting the genre to live-action play. Cyberethnographic fieldwork including participant observation at larps between 2015 and 2018 forms the data basis for this article, followed by qualitative interviews with larp organizers, larp writers, and designers of analog games as well as observations online in respective webforums.

Replays, novelized transcripts of play sessions, have been an entry point into analog role-playing in Japan since the 1980s. With the advent of video sharing sites, replays moved from the book to audio-visual records and a focus on horror games. Creating a fertile ground for this genre, the first indigenous Japanese larp rulebook built on this interest and the ease of access, namely that players do not need elaborate costumes or equipment to participate in modern horror. The dominant form of larps in Japan are one-room games, that work well with horror mysteries. Bleed, a core concept of larp theory denoting trans- and interactions between players and their in-game characters, helps to further understand how the emotional impact of horror larps draws in new players and organizers.

Conceptualizing larp as a network of heterogeneous human and non-human elements, the practice in Japan is hardly defined by a somewhat essential “Japaneseness” but produced through the tracing of these various elements. Horror larp as it is actualized in Japan combines “global” elements of larping with “local” materials and performances so that the practice is (continuously) reassembled. 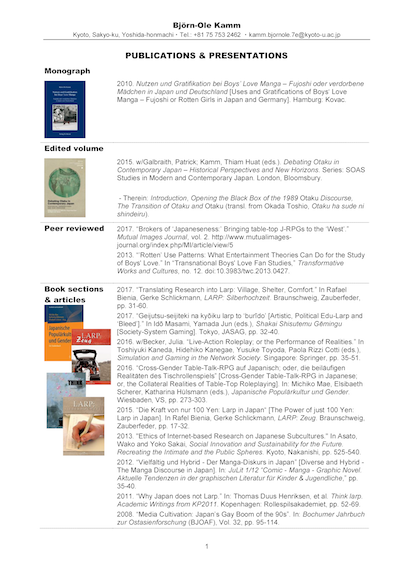